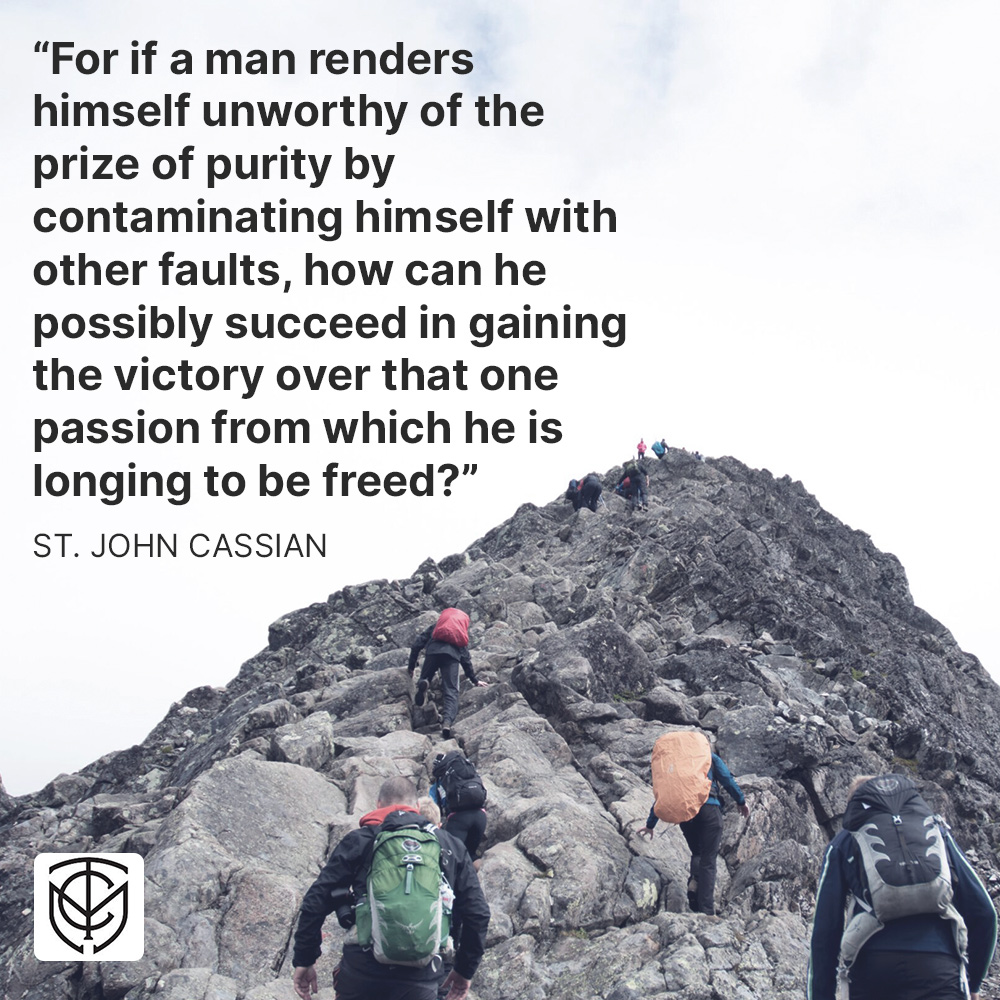 St. John Cassian is a saint worth knowing.  Of the ilk of the Desert Fighters (usually known as the Desert Fathers), he knows the daily and manly fighting it takes to overcome our enemies, which are not the myriad of challenges all around us now, but the enemies in our disordered passions and false loves.  For such foes we need the paradoxical mix of total reliance on God and total engagement of the will.  Not only was he a disciple of St. John Chrysostom, he also went to Rome to defend his teacher against lecherous tongues.  (Another reason we can call many of the early Fathers by the name “Fighters” is that they were fierce in their proclamation and defense of the truth.)  Cassian is also credited with bridging the Eastern ascetic tradition over to Western territories, influencing such folks as one St. Benedict.

Anyway, today I’d like to share a gem I came across, which is his advice on daily overcoming daily faults:

Of the struggle into which we must enter against our faults, when they attack us.

Wherefore we must enter the lists against these faults in such a way that every one should discover his besetting sin, and direct his main attack against it, directing all his care and watchfulness of mind to guard against its assault, directing against it daily the weapons of fasting, and at all times hurling against it the constant darts of sighs and groanings from the heart, and employing against it the labours of vigils and the meditation of the heart, and further pouring forth to God constant tears and prayers and continually and expressly praying to be delivered from its attack. For it is impossible for a man to win a triumph over any kind of passion, unless he has first clearly understood that he cannot possibly gain the victory in the struggle with it by his own strength and efforts, although in order that he may be rendered pure he must night and day persist in the utmost care and watchfulness.

And even when he feels that he has got rid of this fault, he should still search the inmost recesses of his heart with the same purpose, and single out the worst fault which he can see among those still there, and bring all the forces of the Spirit to bear against it in particular, and so by always overcoming the stronger passions, he will gain a quick and easy victory over the rest, because by a course of triumphs the soul is made more vigorous, and the fact that the next conflict is with weaker passion insures him a readier success in the struggle: as is generally the case with those who are wont to face all kinds of wild beasts in the presence of the kings of this world, out of consideration for the rewards — a kind of spectacle which is generally called pancarpus. Such men, I say, direct their first assault against whatever beasts they see to be the strongest and fiercest, and when they have dispatched these, then they can more easily lay low the remaining ones, which are not so terrible and powerful. So too, by always overcoming the stronger passions, as weaker ones take their place, a perfect victory will be secured for us without any risk.

Nor need we imagine that if any one grapples with one fault in particular, and seems too careless about guarding against the attacks of others, he will be easily wounded by a sudden assault, for this cannot possibly happen. For where a man is anxious to cleanse his heart, and has steeled his heart’s purpose against the attack of any one fault, it is impossible for him not to have a general dread of all other faults as well, and take similar care of them.

For if a man renders himself unworthy of the prize of purity by contaminating himself with other faults, how can he possibly succeed in gaining the victory over that one passion from which he is longing to be freed? But when the main purpose of our heart has singled out one passion as the special object of its attack, we shall pray about it more earnestly, and with special anxiety and fervour shall entreat that we may be more especially on our guard against it and so succeed in gaining a speedy victory. For the giver of the law himself teaches us that we ought to follow this plan in our conflicts and not to trust in our own power; as he says: You shall not fear them because the Lord your God is in the midst of you, a God mighty and terrible: He will consume these nations in your sight little by little and by degrees. You will not be able to destroy them altogether: lest perhaps the beasts of the earth should increase upon you. But the Lord your God shall deliver them in your sight; and shall slay them until they be utterly destroyed. Deuteronomy 7:21-23