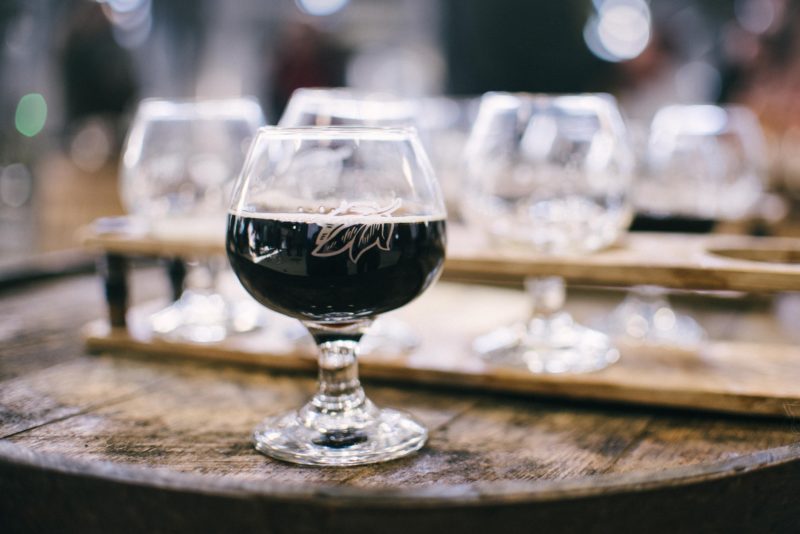 What’s the deal with craft beer? Why does everyone suddenly love craft beer? How can it be that in 1978, there were 89 breweries in the US, but now, there are over 5,300? Why are microbreweries, craft beer companies, and brewpubs opening left and right? Why has production by US microbreweries seen an increase of more than 500% since 2004 [1]? And why does every male craft brew enthusiast have a beard? Okay, I’m not too sure about the beard question, but to the others, the short answer is: because beer is good; and because beer brewed by someone with whom you can speak, someone who enjoys meeting the people for whom they brew, is even better.

A somewhat more long-winded answer to these questions is, in my opinion, the economic theory called “distributism” and the subconscious longing that people have for it. Now before anyone falls asleep or remembers some nightmarish ECON class they had in college, let me assure you that I’ll make this very light, and I think you’ll find it more interesting than you may predict. First of all, I like distributism because it is explicitly based on Catholic Social Teaching and was advocated by folks like Pope Leo XIII, Pope Saint John Paul II, Hilaire Belloc, and G.K. Chesterton. Distributism places emphasis on people as individuals within a community and opposes the lack of freedom present in socialism and the heavy burden imposed on the laboring class resulting from unbridled capitalism.

Now, just a brief overview of distributism: in this system, property ownership is a fun- damental right, and the means of production should be spread as widely as possible rather than under the control of either the state or a few individuals or corporations. Distributism promotes a society of artisans and is influenced by an emphasis on small business, promotion of local culture, and favoring small production over capitalistic mass production. If I were to say that sentence out loud in a brewpub full of people with beards drinking craft beer, I dare say I would get shouts of affirmation and agreement in reply. That’s because this is the type of society people long for.

The one theme of the seven encompassing Catholic Social Teaching that I think is the most applicable here is called solidarity which underscores the unity found in a community of people dependent upon one another. To be in solidarity with others is to share in their experiences, to care about them, and to recognize their dignity as people and children of God. It suggests that one’s own good is not independent of the welfare of their neighbor and of their community. This emphasis on the community and local culture is objectively good and expresses in an ordered way God’s commandment to love one another. Theoretically, a distributist system built upon the foundation of neighborly solidarity (and, of course, augmented by craft beer) would be the type of society that people are realizing is more appealing than one based on impersonal consumer capitalism. By purchasing products from people who live in the same neighborhood, one is extending the Christian ideal of loving one’s neighbors to the economic environment.

So how is all of this related to beer? Well, in my opinion, people are yearning for this type of distributist system whether they realize it or not, and I think that this desire is manifesting itself through the craft beer industry (among others). Many people, the younger crowd especially, are relinquishing the American adjunct lagers made by macrobreweries like Bud, Miller, Coors, and all the rest. They’re leaving behind these beers and flocking to their local microbreweries and brewpubs. I think they’re doing this for a more significant reason than the fact that craft beer tastes better than light lagers. They’re doing it because they have figured out that being handed a freshly brewed beer from the person who made it is more fulfilling than pounding back a Keystone Light. They’ve tapped into (pun intended) the hard work of an artisan who cares about the product he or she is producing. They’ve figured out that there is an actual person behind the product and that the consumption of goods doesn’t have to be impersonal.

The same goes for the brewer; sure, every business person needs to be profitable, but what I see with most craft breweries is that they start as enthusiastic homebrewers who get into the trade because they appreciate excellent beer and care what people think about what they make. Another essential point of distributism suggests that craftsmen should not be alienated from their work. It is beneficial for a manufacturer to see the fruits of their labor, to be able to take pride in what they have made and feel that they are a worthwhile member of society.

In this context, drinking a craft beer is not merely about drinking it. Granted, craft beers are meant to be drunk and are crafted to be the best that they can be, but the experience of a having a craft beer is not entirely about the taste. When combined with a distributist attitude toward economics and a sprinkling of Catholic morality, drinking a craft beer becomes an experience of a communion of sorts. This is not to say that beer itself brings about this fellowship – it is merely a commodity. However, I think that the interactions and experiences centered around craft beer can bring people together in a healthy way, the way members of a community are called to substantiate the love of Christ among themselves and between each other.

So, the next time you find yourself sampling the newest test batch at a local brewery or out for drinks and laughs with some friends at your neighborhood brewpub, look around, notice what is going on around you, and bear witness to the unspoken desire to seek God through the manifestation of the “love of neighbor” described by distributism in the world of craft beer. Cheers! Or as we say in Texas: Prost, y’all!