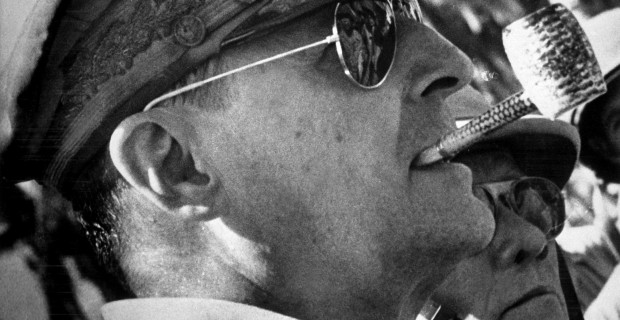 This article was submitted by Dcn. George Wunderlich, a historian and former museum curator. He currently works at Mount St. Mary’s Seminary as a director of human formation for the seminarians there.

As a son of Missouri, corn cob pipes have always been a part of my life.  In the 1960’s and 70’s you could not travel the roads of Missouri without running into the obligatory tourist trap filled with the pipes and images of “hill billies” smoking them.  They were an icon of Ozark culture.  To a certain extent, I am sure that this is still true today. As a pipe smoker, I have owned my fair share of these simple pipes, but until today I never really thought much of them.  The words of St. Augustine changed that for me.

You see, as I was running my errands today I was working on my homily for this weekend’s Masses.  Since the Archdiocese of Baltimore celebrates the Ascension on Sunday, that is the subject of my preaching.  To help me with my ideas, I read Augustine’s sermon on the Ascension.  He starts by saying:

As I pondered these words over and over again, I thought about my own life and the journey that has brought me from Missouri, to Maryland, from an insurance executive and museum director to seminary administrator and from non-practicing Catholic to Deacon.

When I was first married, I rarely went to church and my life was truly conformed to the world.  Money, fine cars, nice houses and success in life were my main goals.  Even in my hobbies, I was trying not simply to keep up with others, but to excel and be noticed.  I loved to serve others, but only on my time and in the ways I chose.  Materialism was more important to me than putting others first.  Thanks to my wonderful wife, that all began to change with the birth of our first child.  Irene realized that we were missing God in our lives and that all of the cars, money and acclaim could not truly fill the void.

Through her calling us back to God, we began to gain strength and peace: a peace that was totally lacking.  In a few short years, I was ready to cut my ties to the family insurance business and try following my love of history and music.  Our financial house fell apart.  There were times over the next four years when we did not know where our next grocery money would come from and yet, we did not suffer.  God kept us together and kept giving us His peace.  Those lean and simple times are some of the most memorable of our thirty year marriage.  We were seeing, for the first time, what it was like to “set our hearts on the things that are above…” God was using my avocations to prepare me for something greater.  He was preparing me for conversion and eventually ordination.

Well, all of this brings me back to that pipe.  As I was hammering out the words of my homily, the idea of elevating hearts to heaven and thinking of that which is above kept rolling through my mind.  I must ascend to heaven with Christ….now!  What holds me back?  The world!  Materialism!  Pride! Sin! The list could go on and on.  It is in the quiet of simplicity that we can let the world and ourselves go and ascend with Jesus.

I started smoking a pipe at 17.  I would love to have a fine Peterson pipe from Ireland.  I would love to have an expensive meerschaum pipe intricately carved and finely finished.  But the whole time I was reflecting in my car, that plain corn cob sat on the seat.  I finally picked it up and said, “You are all I need”.  My desire for more is simply an impediment to my ascension!

When I smoke a pipe I do so mostly when I am with others.  We smoke, in moderation, as a community.  It is the love we share, the charity toward one another that is important.  It is in seeing one another as mutually supportive parts of the Body of Christ that we are drawn together by Him.  It is our love for God and all His creation that is important. It is how we live our baptismal promises and how we act as Christ’s body on earth that matters.  Everything else is a distraction. And when I do smoke alone, I am bathed in quiet.  In that quiet I can pray, but moreover, I can hear the whispering voice of our quiet God.

So,  I am going to keep my corn cob.  I don’t need a finer pipe; I NEED to elevate my heart and mind to heaven. Anyone up for a quiet smoke and some good conversation?

Deacon George Wunderlich is the Vice-President of Those Catholic Men Inc. Since July 2015, Deacon Wunderlich has held the position of Assistant Director of Human Formation at Mount St. Mary’s Seminary. Ordained in the Archdiocese of Baltimore in 2013, he serves at Holy Family Catholic Community in Middletown, Maryland. Previously, he was the Executive Director of the National Museum of Civil War Medicine and Letterman Institute where he specialized in historical leadership programs for the United States Armed Forces, private industry and religious organizations. He is also regularly seen on several television networks including History, H2, Military History, A&E, PBS, National Geographic Channel and Smithsonian.

Want to Be Holier? Meditate on Christ’s Words and Deeds Daily