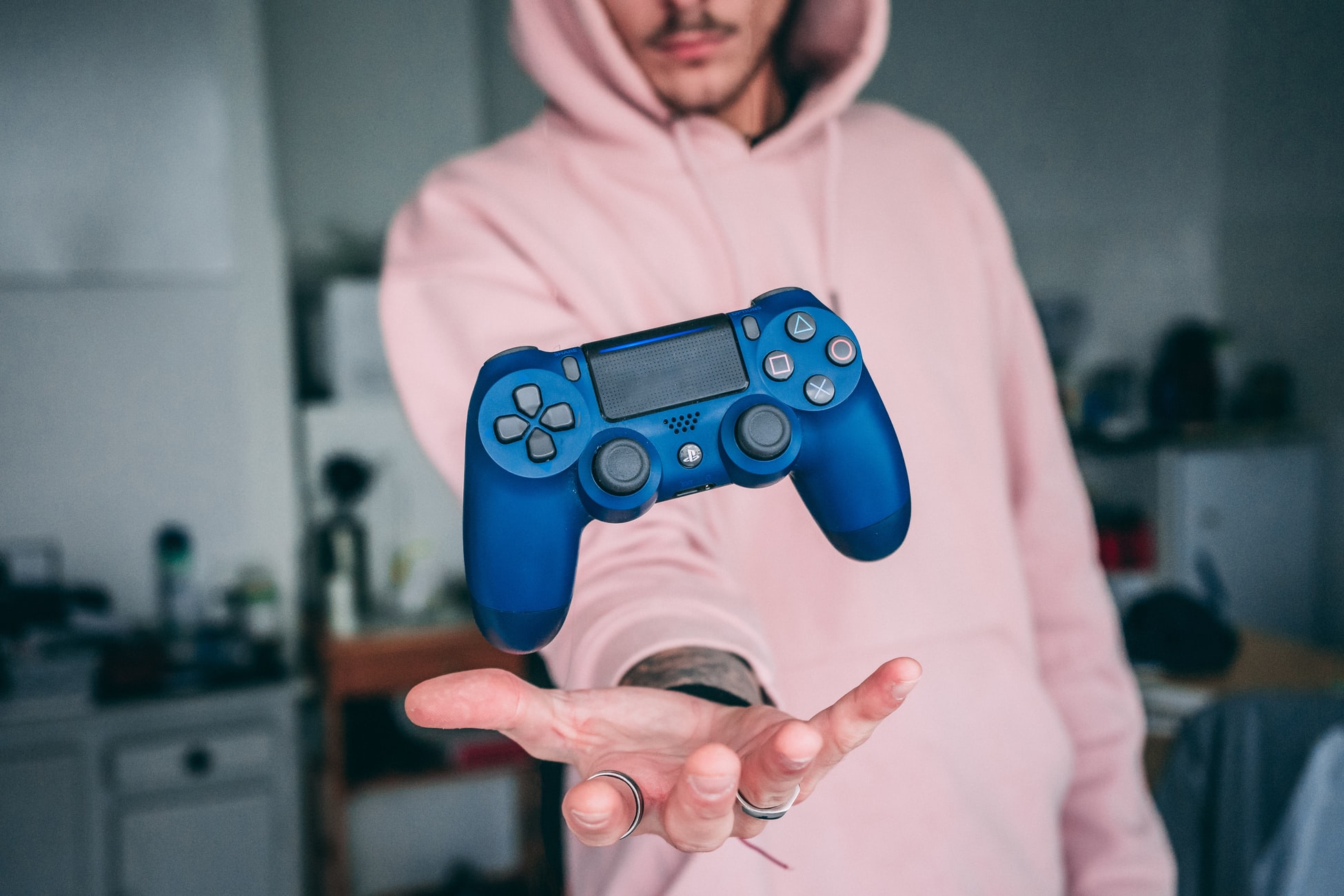 The video game industry generated a record $43.4 billion in worldwide revenue in 2018. That was an 18% increase over the previous year. For comparison, in 2018 global box office revenues were $41.7 billion and revenues for streaming video services were around $28.8 billion. Video gaming has come a long way since Pac-Man and with growth expected in virtual reality gaming, revenues from video game sales are likely to increase exponentially, leaving Hollywood and streaming services like Hulu and Netflix in the dust.

Video Games in the Culture

It makes sense that video games have begun to outpace Hollywood movies.

Looking at it from a value-based perspective, a movie outing for a family of four for two hours (excluding food and drinks) costs about the same as a newly released video game which can entertain one or more people for dozens or even hundreds of hours. Streaming video offers more value to viewers than the box office, but when we switch from a value perspective to an entertainment-based perspective, we see something interesting.

Many people play video games, read books and watch movies because they love stories. Watching a story unfold in a movie theater or from your living room couch doesn’t compare to taking on the role of the hero in a video game. There’s a feeling of satisfaction and accomplishment that players experience when completing tasks in a video game that they can’t experience by passively watching a movie or reading a book.

So what should Christians think of video games? Should we avoid them? Are they vanity, a simple waste of time? Is it immoral for people, including adults, to spend hours in front of a TV or computer screen or attached to a virtual reality headset playing video games?

Amusements According to the Gentle Saint

In his book, Introduction to the Devout Life, which was published in 1609, St Francis de Sales said of amusements:

“No one blames children for running after butterflies, because they are children, but is it not ridiculous and pitiful to see full-grown men eager about such worthless trifles as the worldly amusements before named [i.e., dances, plays, festivities, and what Francis called pomps], which are likely to throw them off their balance and disturb their spiritual life?” (46)

That doesn’t sound good for video gamers, but don’t be so quick to condemn them.

Keeping Francis’ statement in mind, what are we to make of people who spend hours each week watching professional and college sports? Are fans who buy team jerseys, paint themselves their team’s colors, consume large quantities of beer and foods high in salt, carbs and fat, and yell at their TV every Sunday afternoon between September and February any more virtuous than video gamers? And should watching certain sports like mixed martial arts be totally off limits to Catholics?

What about people who enjoy games and hobbies like chess, crosswords, puzzles, painting, needlework, golf, martial arts, fishing and hunting? They spend many hours on those activities and sometimes invest a great deal of money in them. Are trophy hunters or men who spend weekends on the golf course to drum up new business any more virtuous than video gamers? What about people who spend hours at the gym each week, putting everything else in their lives on hold until they get their exercise fix?

Does Francis believe Christians shouldn’t have any fun? Don’t cancel your trip to Disney World just yet.

Francis understood the vanity of amusements but also recognized the need for leisure. “We must needs occasionally relax the mind, and the body requires some recreation also. … It is a great mistake to be so strict as to grudge any recreation either to others or one’s self.” (185)

He said activities like walking, harmless games, music, as well as games that “strengthen the body or mind, such as tennis, … running … chess and the like are both lawful and good. Only one must avoid excess, either in the time given to them, or the amount of interest they absorb; for if too much time be given up to such things, they cease to be a recreation and become an occupation; and so far from resting and restoring mind or body, they have precisely the contrary effect.” (185)

Francis also knew excessive physical and mental activity can result in exhaustion and “setting one’s heart” upon such activities is wrong. (186) He also cautioned against becoming “engrossed … eager or over fond of any of these things.” (186)

Francis believed certain amusements, which he called “games of hazard,” are “plainly bad and harmful” and are forbidden. (186) He called games of chance “unreasonable” because “the winner often has neither skill nor industry to boast of, which is contrary to reason.” (186)

Francis also believed some amusements, though not forbidden, are “dangerous.” He specifically focused on dances and balls (probably because many women were under his spiritual direction when he wrote Introduction to the Devout Life). Francis noted, people who attend these events are more likely to be up late and not get enough rest, making it harder for them to fulfill their duties the next day, which includes not only whatever occupation they are in, but also prayer and good works. (187)

He observed events like balls and dances are likely to foster vanity and other vices, so he encouraged watchfulness, moderation and dignity for anyone engaging in dangerous amusements. (187) “Believe me, my daughter, these frivolous amusements are for the most part dangerous; they dissipate the spirit of devotion, enervate the mind, check true charity, and arouse a multitude of evil inclinations in the soul, and therefore I would have you very reticent in their use.” (188)

Francis urged those under his spiritual care to be careful about using amusements as “recreation” and “not as a pursuit” saying dangerous amusements should be seldom engaged in. (190) “If it is a constant habit, recreation turns into occupation. … [L]et your rule be to [engage in questionable games] chiefly when courteous consideration for others … requires it, subject to prudence and discretion; for consideration towards others often sanctions things indifferent or dangerous, and turns them to good, taking away what is evil. Thus certain games of chance, bad in themselves, cease to be so to you, if you join them merely out of a due courtesy.” (190) Therefore, Francis says engaging in even some forbidden amusements might be acceptable to maintain community with others out of a courtesy to them.

Francis’ view of amusements can be summarized as follows:

“[A]lthough it is lawful to amuse yourself, to dance, dress, feast, and see seemly plays—at the same time, if you are much addicted to these things, they will hinder your devotion, and become extremely hurtful and dangerous to you. … [W]hile I do not forbid the use of these dangerous pleasures, I say that you cannot take an excessive delight in them without their telling upon your devotion. … [T]he human heart which is cumbered with useless, superfluous, dangerous clingings becomes incapacitated for that earnest following after which God is the true life of devotion. … [W]hile the acts themselves are not necessarily incompatible with a devout life, all delight in them must be harmful.” (46)

Francis’ insights are as valuable today as they were in 1609 when his book was published. The main points to keep in mind are:

In sum, we must practice detachment with respect to amusements.

Now that we know the different types of amusements and the danger of becoming attached to them, which category do video games fall into? Are they harmless, dangerous or forbidden amusements? Is there any goodness or value in video games or are they simply vanity and a waste of time?

Based on what Francis said, video games generally appear to fall into the dangerous amusement category. Though they are not a totally useless form of amusement which requires no skill to win like most games of chance (unless of course the particular video game mimics those games), video gamers are susceptible to various abuses which can interfere in their relationship with God.

In particular, video games can be addictive, they can lead to cyber-bullying and other destructive social behavior, and playing some video games, such as those that encourage or reward the player for engaging in brutality, senseless violence or other immoral or criminal behaviors or which depict blood, gore or sexuality in a pornographic manner or which otherwise devalue human life and dignity, is contrary to living a Christian life, even if the reprehensible behavior only occurs within the video game world. If a person willfully enjoys engaging in sinful acts, even if the acts are simulated on a computer, then a sin has been committed. Therefore, some video games fall into the forbidden category (i.e., clearly those that encourage crime, murder and mayhem).

However, notwithstanding the dangers, video games aren’t all bad. Studies have shown that people obtain certain benefits from playing them. Some research says gamers can improve their coordination, cognition, problem solving skills, memory, attention and concentration, multi-tasking skills and social skills (see the sources below). I haven’t delved deep into these studies myself and I would imagine some of them might be funded by the video game industry, but I can see how a person might develop planning and strategy skills by playing certain games and how gaming encourages learning and abstract thinking overall (because playing most games well entails figuring out the rules and then playing as efficiently as possible).

Some video games are evil in nature because of their content, but I believe there are some video games like No Man’s Sky and Outward that promote good things like beauty, creation and wonderment, all of which are compatible with the Christian faith, and also which encourage learning and developing positive skills like planning, resourcefulness and strategy. I will write more about those two games in another article.

Since video games are what St Francis de Sales would call a “dangerous” amusement, caution should be exercised with them. Some video games are forbidden and should be completely avoided. Children who play video games must be supervised by their parents. Parents should restrict which games kids play and also the time they spend playing them. Playing video games can become an addiction, so Christians who choose to play them or who permit their children to play them should practice moderation and develop a healthy detachment in relation to them.

*The parent failed this child. If the child was addicted to video games, his parents should have stepped in long ago and stopped him from playing. The mother’s comment at the end of the article, “I’m taking lessons from Parker” is backward. It is Parker who should be taking lessons from his parents, not the other way around.

Note: There is a lot I could not cover in detail in this article including all of the different kinds of video games, how many hours a week playing video games is reasonable, and including other social and physical activities in a person’s schedule to achieve balance. Those and other specific topics are for another time.

Where Are Their Fathers?