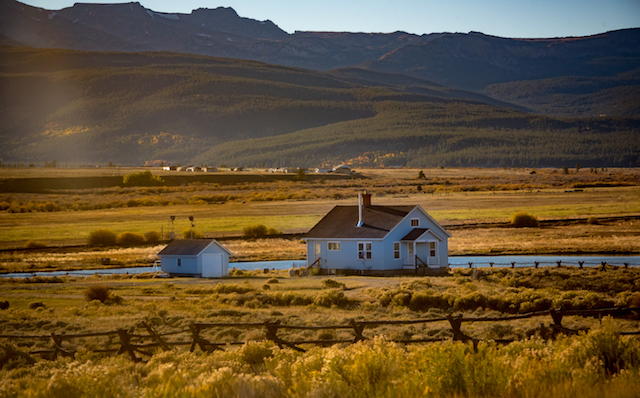 Land has a central place in the Bible.

We spring from it and are placed within it deliberately by God:

Then the Lord God formed man of dust from the ground, and breathed into his nostrils the breath of life; and man became a living being. And the Lord God planted a garden in Eden, in the east; and there he put the man whom he had formed (Genesis 2:7-8).

It is central to the promises given to Abraham, “To your descendants I will give this land” (Genesis 12:7) and Moses: “I have come down to deliver them out of the hand of the Egyptians, and to bring them up out of that land to a good and broad land, a land flowing with milk and honey” (Exodus 3:8). The Holy Land provided the foundation for the identity and life of God’s people. Jesus moves us beyond a strict attachment to one particular place, but the New Testament also reveals that we will have an eternal place to settle: “Then I saw a new heaven and a new earth” (Rev 21:1).

Although Christianity is not tied to particular soil like Judaism, nonetheless, Hilaire Belloc argued persuasively in The Servile State that Christian culture created conditions which favored family stability through land ownership. With the distribution of land in the Middle Ages came economic freedom, though this has collapsed in the modern period, especially after industrialization. Belloc speaks of the first condition needed to restore the distribution of property in his Essay on the Restoration of Property: we must desire it. Without this desire, not just for land but for the freedom it brings, there will be no action for its restoration.

It surprising how many people have come to express this desire. (A very small minority of the population to be sure, but a growing percentage of young, faithful Catholics.) Unfortunately, however, for most this desire ends in frustration. It is very difficult to support a family on the land today as there are too many economic demands, such as a high mortgage due to the rising cost of land and housing and healthcare. The deck is also stacked against turning a profit on the land due to the industrialization and centralization of farming. You can commute from the land to work, but the cost of land near an urban area is prohibitive and then one cannot focus on the land with a long commute. Is the desire for land even helpful and good?

Leo Tolstoy asked the question in his short story, “How Much Land Does a Man Need?” Pahom, the main character, reflects at the beginning: “Busy as we are from childhood tilling Mother Earth, we peasants have no time to let any nonsense settle in our heads. Our only trouble is that we haven’t land enough. If I had plenty of land, I shouldn’t fear the Devil himself!” The devil heard his boast and assisted him in continually acquiring more and more land. He kept pressing East (like Americans pressing West) until he encounter the nomadic Bashkir tribe. They told him he could have all the land he could mark out before the sun set. He could not contain himself and kept mapping out more, before he realized he had to rush back to the meeting spot before the sun set. “‘There is plenty of land,’ thought he, ‘but will God let me live on it? I have lost my life, I have lost my life! I shall never reach that spot!” He just made it back as the sun set and collapsed in front of the group of Bashkirs awaiting him. “His servant picked up the spade and dug a grave long enough for Pahom to lie in, and buried him in it. Six feet from his head to his heels was all he needed.”

I recently read Wendell Berry’s novel, A Place on Earth. It culminates with two funerals, one real and one mock. Following this Berry concludes by reflecting through one of the main characters Matt Feltner on the stability of the land itself, which outlasts human life. The land has a history stretching back before our arrival on earth and it will continue beyond the stretch of any one of us. The land connects us to the past and future. We receive it, make our contribution, for better or worse, and pass the baton to the next generation. Connecting this back to the funerals, I thought that the land truly is our destination: six feet is all we need! We will return to our roots and reintegrate with it. I think this part of the natural reason for a desire for land: we come from it and headed toward it (at least temporarily before we receive the new heaven and new earth). Land is not only central to the Bible, but to our own identity.

So what can we do in a society that disfavors the ownership of what Leo XIII called productive property? First, I think it is important in light of Tolstoy to recognize that simply owning land will not solve our problems. The desire for land can be a distraction and even a mirage as we seek for a false sense of security. That said, the desire for land points us to the need for change. We have to live differently, breaking out of economic and social passivity. I have a friend who made some incredible changes to his family’s lifestyle in the suburbs, saying that he couldn’t wait for his dream of acquiring land to come true to live his ideals. We desire land because we don’t want to live a consumeristic lifestyle that builds upon the exploitation of workers, destruction of the environment, and the erosion of own independence and self-sufficiency.

The desire for land is a wakeup call to begin to make whatever changes we can to live a more human and family centered life. Land itself will not solve our problems, but it is an important sign of (and maybe eventually a step towards) a renewal of Christian culture.

catholiccreationfarmgenesishomejaredlandruralstaudt
05 16 2017
Back to all articles

Novena for the Abuse Crisis

No Other World Religion Has Any Similar Claim: Suffering Becomes Love