A New and Necessary Book by Jason Craig, Editor of Those Catholic Men 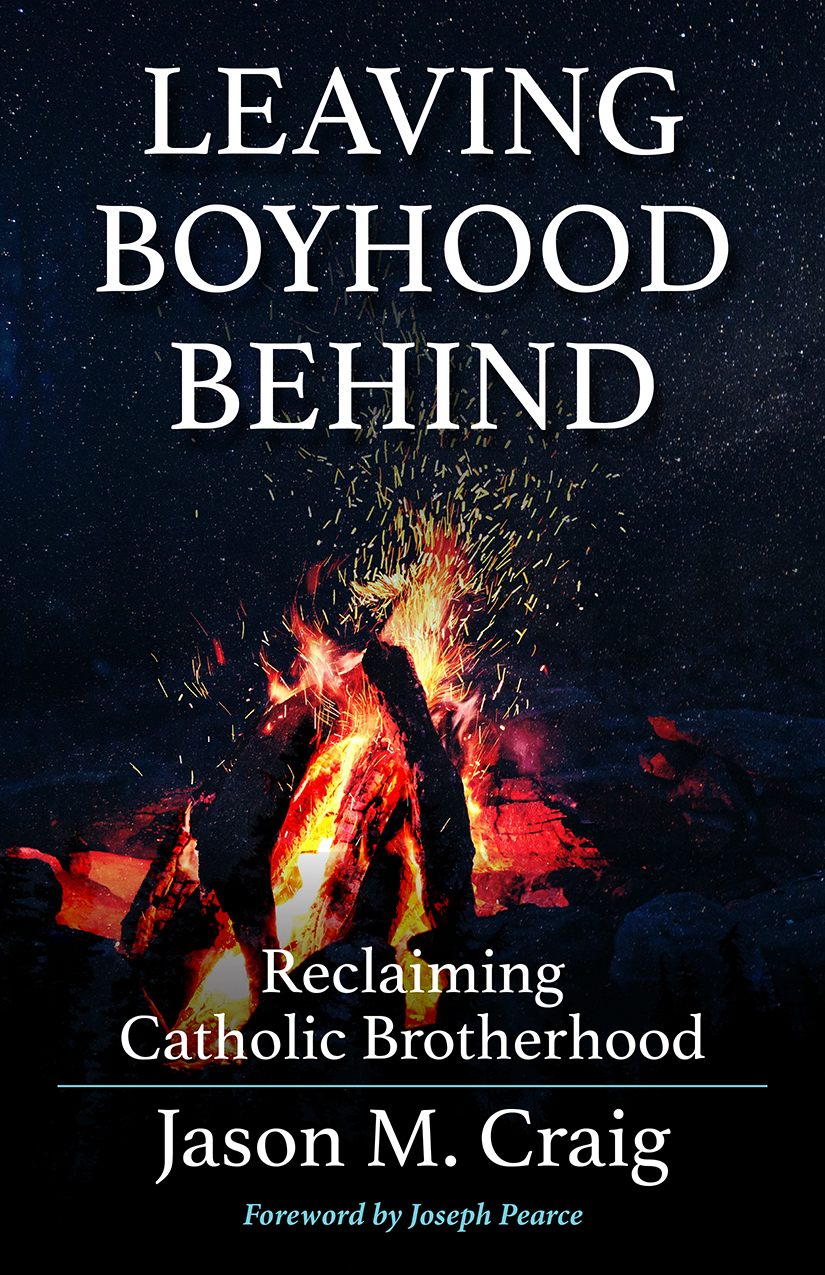 Dear fathers, mothers, and those that come from them – read this book!

Every healthy society throughout history has had cultural and ceremonial rites of passage to ensure that boys became men, because, as traditional wisdom knows, it won’t happen on its own.  Broadly speaking, our society does not have these rites, and the few that are left are being suppressed.

The widespread man-crisis is devastating men and families. Males today are stuck in perpetual adolescence and blatant insecurity, becoming either brutes or brats. Women lament the void of “good men”, giving up on finding one or carrying alone the heavy burden of single motherhood. Children, longing for a loving father, are let down, abandoned, or even abused.  Adult males are confused, lonely, self-loathing, mired in vice, and looking for meaning.  Something needs to change.

Jason Craig is a man who has been fighting this problem for a long time. As co-founder of Fraternus, Craig has been instrumental in cultivating intergenerational brotherhood and the recovery of mentoring.  Craig claims the man-crisis flows inevitably from a spiritual and general immaturity that follows upon the absence of rites of passage, the cultural means of bringing boys out of boyhood and into the fraternal life of men.  Men need to mature on a natural level, and with that they need to “grow up to salvation” (1 Peter 2:2).

In Leaving Boyhood Behind, Craig focuses on the essential need for males (boys and unfinished, empty, or despairing men) to leave behind the immaturity of sin and selfishness in order to grow up in virtue and brotherhood. This book simultaneously shows the depth of our problems today and how we can climb out of them.  Drawing on the wisdom of ancient rites of passage, the amazingly consistent lessons of classical literature and culture (including our own), and ultimately the revelation of the Perfect Man, Jesus Christ, Craig offers an incisive and practical approach for initiation into authentic masculinity.

Click here to pre-order from St. Joseph’s Farm (and help the author support his family).

“A man once went to the doctor and complained that when he pressed upon his leg with his finger, it hurt, when he pressed on his arm, it hurt and when he pressed upon his head, it hurt. The man exclaimed to the doctor that it just hurt everywhere. The doctor informed him, after tests came back, that he had a broken finger. Like the man with the broken finger, everything will hurt if the source of pain is not identified and dealt with. Jason is revealing the source of brokenness, pain and dysfunction among our men today.

In order for men to be healthy leaders who can protect, provide for, and lead their families, there must be a plan to grow up and act like mature men, not boys who are still playing with toys while their lives and their families remain directionless. Jason Craig is insightful in pointing out the genesis of our problem, and he offers a compelling plan that I believe will powerfully impact the Church. Saint Paul said, ‘When I was a child, I spoke like a child, I thought like a child, I reasoned like a child; when I became a man, I gave up childish ways’ (1 Cor 13:11). If you are interested in giving up childish ways and becoming a man, this book is a must read.”

“Finally, a book on the Christian faith, and the crisis of manhood in our time, by someone who remembers that we have bodies, that a boy’s body is not like a girl’s body, that boys are supposed to become men, and the most important of all the natural truths regarding this matter, that manhood is something men have to win, amid real danger, and not something they naturally and gradually grow into. Or I might say that our crisis of manhood is to have forgotten that the passage from boyhood to manhood is necessarily a crisis. Jason Craig understands these things, and he has worked with boys and young men to develop in them the natural manhood that seeks its perfection in Christ. If you have a son, or if you want some clear and powerful advice on how to become a stronger and more effectual Christian man and father, you should read this book. Actually, you should get together a group of men in your parish and read it all together. Not only read it: put it to work. Words are cheap, as Craig knows. Actions are what matter.”

“Jason Craig is a world-changer on one of the most important missions in the world right now: to recover the masculine spirit. His important work is about much more than winning a culture war. It’s about winning the war in the hearts of men to rediscover their identity, worth, purpose, and joy in Christ. Follow his banner, friends!”

“Manhood is facing an unprecedented crisis of cultural confusion. What, after all, is ‘authentic’ masculinity? We desperately need guides both wise and trustworthy that can help us to recover what we have lost. Jason Craig is just such a guide. In this powerful, succinct, and superbly written book, Craig shows us the meaning of the masculine vocation and how to live it. He reminds of essential truths like the importance of fatherly leadership, initiation, and discipline in the journey from boyhood to manhood. Leaving Boyhood Behind is strong medicine — a potent remedy to the crisis of masculine identity. Every man should read this book.”

“Jason Craig’s Leaving Boyhood Behind could not be more timely. At the root of our ecclesial crisis today is a crisis in masculinity. When boys go uninitiated into manhood, we find ourselves in situations like the one we are in: where men are not men. This book returns us to the rites that are the greatest longing of a boy’s heart, and the greatest blessing a father can bestow upon his son.”

“How do boys become men? We have come to the growing realization that we have an urgent crisis of masculinity in our society. Jason Craig has been at the forefront of getting to the bottom of this crisis and proposing practical solutions, rooted in the father-son relationship. Our future depends greatly on how we raise up the next generation of leaders. Thankfully, Mr. Craig gives us guidance on the work of forming our sons and in the process inspires us to become better men.”

— R. Jared Staudt, Ph.D., Director of Formation for Catholic Schools and Catechesis for the Archdiocese of Denver

“Ever since King David told his son Solomon to ‘Be a man’ until this day, boys have struggled as to how exactly to be men. This is where this book comes in! Jason Craig gives us the ‘how to’ on becoming a man. This is a much needed and long overdue book, and I highly recommend it.”

— Fr. Larry Richards, author of Be a Man

“God forms manly virtue through the brotherhood of men, on a common quest, in pursuit of a goal that is too lofty for them to achieve alone. Men become men as they move in action together. The walls of Jericho that separate men must come down. We need to get real with each other and challenge and equip each other. As the walls that separate us come down, the walls of the temple must be rebuilt. As in the days of Nehemiah, men of valor must step into the breach, one working, the other standing guard with sword and shield in hand. Jason’s book is the ram’s horn sounding loudly with a call to manliness.”

“God’s twin blessings of family and the Church have come under grave assault; the blessing of marriage is being rejected or redefined, and grave scandals and heretical ideas are tearing the Church apart. What’s needed is for Catholic men to renew their commitment to be self-sacrificial spiritual fathers whose highest purpose is to lead their wives and children to heaven. In Leaving Boyhood Behind, Jason Craig describes the ‘man-crisis’ and offers deep and accessible wisdom about how men can grow into fatherhood and lead their sons to the joyful calling of Catholic masculinity. Men who grasp and live out this wisdom will experience growing joy as they enter into the challenging task of restoring the family and rebuilding the Catholic Church.”

“St. John Paul II said, ‘The future of the world and of the Church passes through the family.’ Leadership for the future of the Catholic family requires mature fatherhood, following in the footsteps of Saint Joseph. How do we raise and spiritually form such men in the midst of a society that encourages dissipation and perpetual adolescence? In Leaving Boyhood Behind: Reclaiming Catholic Brotherhood, Jason Craig clearly, forcefully, and knowledgably shows how the passage from boyhood to manhood is accomplished in the twenty-first century. Each chapter is packed with a blend of penetrating wisdom and practical advice. This book is, by far, the most important resource on raising godly young men that I’ve ever encountered. I not only give it my highest recommendation, but my sincere hope is that the fathers and mothers raising my grandsons will read it and heed it.”

“An awesome book! Leaving Boyhood Behind is a welcome voice in the building crescendo of contributions furthering Catholic male spirituality. Jason Craig explores the transition from boyhood to mature manhood, combining well-researched inquiry, sacred Scripture, and practical, real world examples in a way that both inspires and challenges men to take their spiritual lives to the next level. This book is an invaluable resource for all Catholics who care about the intellectual, physical, and spiritual development of the next generation of men.”

“This book on initiation into manhood is much needed in our time. I can’t think of anyone more qualified than Jason to write it. He has lived this reality personally and has led many men and teenagers through this process in his work and ministry. I have read other books on this topic, but none as well researched and integrated with our Catholic Faith.”

boyhoodfatherhoodinitiationmanhood
12 17 2018
Back to all articles

The Mountains Are Calling, and I Must Go