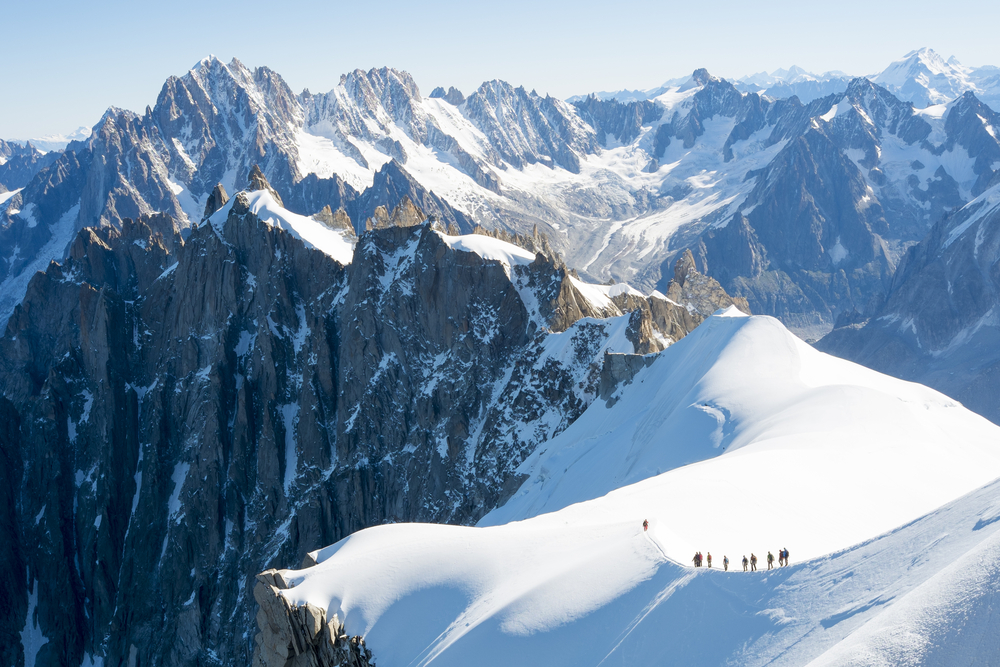 Grace comes at the most unexpected times and in the most unusual places.

I had a beer in hand, relaxing after skiing the glaciated slopes of Grands Montets, on a perfectly sunny, bluebird day.   The view before me - Mont Blanc, an immense massif rising 13,000 feet above the Chamonix valley floor, the rooftop of continental Europe.  I was sitting with two close friends, listening to a local French band performing what is arguably the worst rendition of Dire Strait’s Money for Nothing in recorded history.  It was in this unexpected moment that a singular thought came to mind:  This moment is perfect.  And it is not enough.

It’s hard to describe what made this a grace, as it sounds rather depressing.  The human experience seeks perfection, and every failed attempt makes its pursuit a fleeting mockery.  What Nietzsche called the coming of nihilism  is nothing more than the accumulated despair of a postmodern heart, a tragic fate of empty wanderlust.

But grace is real, in fact it is a participation in the fullness of reality.  It could we thus say that belief in a graced filled universe is the antithesis of nihilism.  Every experience of grace in some way offers a consolation, a freedom and an encounter.  That moment in Chamonix (which was not enough) was not depressing but remarkably consoling.  That moment’s finitude was the source of its freedom, when nature got to be nature, a gift got to be a gift.  But most importantly, it was a moment of encounter, for this spiritually-dense ski-bum priest finally realized that his perfection lies outside the natural order.

Nature is made for the supernatural.  These words from Henri de Lubac describe the paradoxical nature of human existence: I am made for something that I cannot find in this world, namely God.  I live a natural life, but cannot find fulfillment except in something outside the natural.  The end and purpose of my nature is the supernatural.  St. Thomas Aquinas, building on the tradition, articulated it with great clarity: Omnis intellectus naturaliter desiderat divinae substantiae visionem (every intellect naturally desires the vision of the divine substance).  Without this vision, man will not experience perfection.  No mountain, no ski run – nothing in creation – can fulfill this desire.  The life of faith only makes sense within this context, for it is the only way to man’s fulfillment.

We are living in a time when Christianity is a lifestyle option for man’s self-actualization (and a not very helpful one at that).  We measure what is Christianly meaningful with what is humanly purposeful as Von Balthasar says.  If I find Christianity to be helpful to make me a good person, then I am happy to embrace it, according to how I see fit.  This is a radical departure from the ancient (even pagan!) assertion that man cannot live a fulfilled life without God.  In the Paradiso, as Beatrice leads Dante into the first circle of heaven, he writes of this supernatural end coming to fulfillment:

That which is born with us and cannot die,

Thirst for the godlike realm, had made us skirr

Almost as swiftly as the visible sky. (Canto II, 19)

But how far we have fallen from this celestial vision of man’s destiny.  The radical cultural changes of the last century, which have conditioned the new approach to faith, are at their roots anthropological.  If we want to restore faith, we have to restore the true meaning of man.  The Christian understanding of humanity begins in a two-fold gift in the Garden of Eden: the gift of man’s existence and the gift of his sharing in the divine life.  Man was created with a supernatural end, and this makes sense before the loss of sanctifying grace in original sin.  Since this mortal wounding of our nature, we live with what Paul Ricour calls an unstable ontological constitution (meaning that we are unstable at the deepest level of our being).  Even at Chamonix on the perfect ski day, fallen man’s ontological instability is still evident.  And everyone who glimpses similar moments of apparent perfection, knows the pain of its disenchantment.  The moment of “perfection” is swept away by time, who ruthlessly strips us of the moment.  The great difficulty of renouncing these apparent perfections fuels the new attempt to procure again “the perfect moment” and so on.  But life is long – and in due time, the exhaustion of this never-ending cycle culminates in a form of existential vertigo, in the stark realization that human life is tragic.  Even Americans, masters of medication, cannot distract ourselves forever.  This cycle of adolescent pursuit of perfection, pardonable for a college freshman, wear through the thin spiritual exterior by the beginning of one’s third decade.  Any spiritual reflective person can see how haggard and worn out these souls become.  And with too much time, you may even end up in a French Dire Straits cover band.

Bernanos tells us that our mystery is not our destiny, but our vocation.  Most know that we are destined for perfection, but the problem is the vocation to receive something we cannot find in the natural realm.  Only in the call of Jesus can man find what man really is, that he only knows himself by surpassing himself.  The transcendence of grace, reduced to a lifestyle option held by a few antiquarians, is in fact the key to unlocking, and living, the mystery which is man.

This moment is perfect.  And it is not enough.  What a surprisingly wonderful thought.  Another unusual and unexpected moment of consolation, freedom and encounter in the drama of salvation history.  For as Paul Claudel writes, “Our God is ‘a living God, ever new, ever in the state of being an explosion and a source, subject to no necessity arising out of that creation which he brought from nothing, a God for ever inventing the heaven in which he dwells, and whose next move we can never foresee.”

destinygraceheavensupernatural
04 21 2016
Back to all articles

How a Father Can Protect His Son